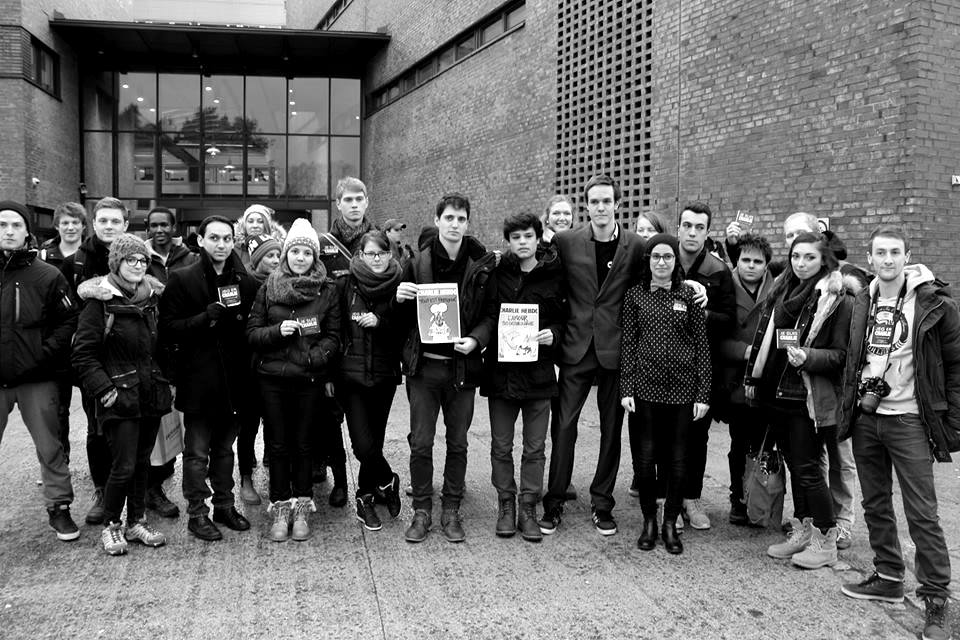 On January 7, 2015 two men dressed in black and heavily armed entered the headquarters of Charlie Hebdo in Paris and opened fire killing twelve people including two policemen. They also seriously injured at least four people, which is the deadliest ratio for such an attack since 1961 in France. In the two days following the attack against Charlie Hebdo, an accomplice of the terrorists murdered a policewoman and took hostages in a kosher supermarket, killing four people.

As a French student at University of Agder and also as a Unikum member, it was really important for me to organize a tribute for the events that hit France last week. I wanted to show my support even if I was not in France at that moment. What happened is a tragedy and it is hard to explain what I feel about it.

I have to admit that I did not read Charlie Hebdo regularly. I have seen some covers sometimes and it is true that when you look at their drawings they can be seen as provocative especially in regards to religion. But that does not mean that their authors are racist, Islamophobic or I do not know what else. No one deserves to be killed because of provocative drawings. Freedom of speech is an essential right for French people, the right to be able to express what you think without fear of the consequences. Without fearing death.

Anyway it is a really complicated topic that I don’t mean to discuss at large here, and I think the quote that would describe my opinion best here would be Voltaire’s:

I do not agree with what you have to say, but I’ll defend to the death your right to say it.

While watching these terrorist acts happening in Paris while being in Norway I realized something really sad: I have never felt myself as French as in these recent days with all these tragic events. Perhaps it is because I’m not in France right now and I have not lived through these events from the inside. Or maybe it is because I have lived in Norway for 6 months now. Feeling closer to my country would have been a new thing that studying abroad has taught me. However I’m sure that this has recreated this feeling of solidarity that we had not seen for a long time in France.

On Wednesday, 14th of January, we gathered in front of the University and walked towards the city.

Gathering people through this event here in Kristiansand, even if it was not as big as I was expecting, was a great experience. I also think that it bound together our small French community here at the university. Feeling committed, expressing what we feel with people and seeing that people were supportive made us – the French students who are studying here – happy. After all ,freedom of speech concerns everyone and terrorist attacks were committed against it. A beautiful speech has been made and I only wish everyone would hear it. Then we made a minute of silence. At that moment I had tears in my eyes. I was thinking of the victims and their families. I tried to imagine how it must have been hard to lose the people they love in such a situation. When silence was broken by some applause we started to walk to the cathedral. It was a symbolic march.

I know that many people think that even if it is terrible for the French community a lot of terrible stories are happening every day in the world like the 2000-Nigerians massacred in their villages on January 3rd – a story which unfortunately has made less noise than the Charlie Hebdo one.