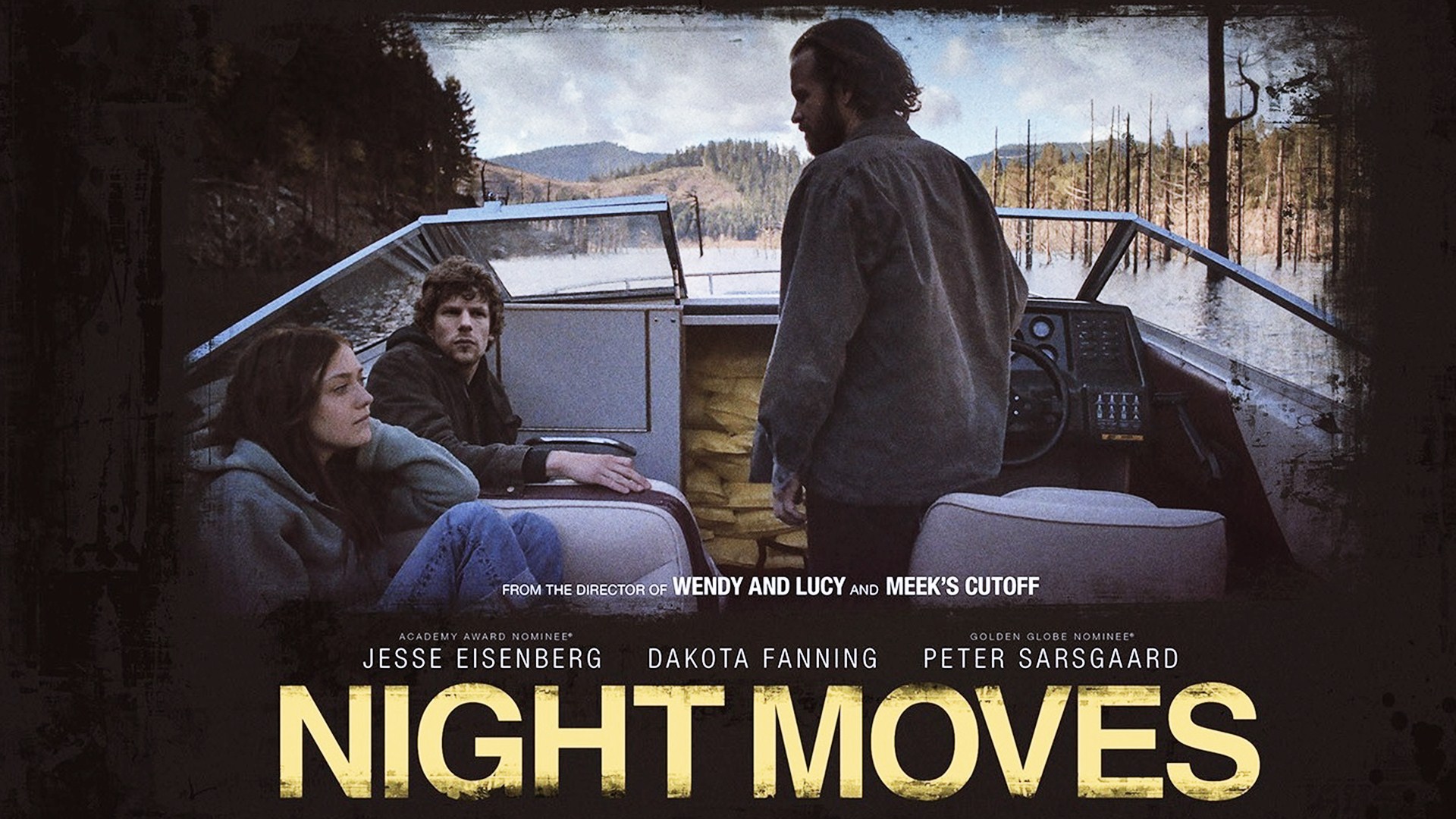 Night Moves, the American drama from 2013 has received a lot of flattering reviews and really few critical comments. Well, the question that comes to mind is: does it deserve the Winner Grand Prize on the Deauville American Film Festival or being an official selection on the Venice or Toronto Film Festivals?

On Thursday evening January 29th film lovers living in Kristiansand had an opportunity to watch the screening of Kelly Reichardt’s picture in Cinemateket called Night Moves. The film, in which Jesse Eisenberg, Dakota Fanning and Peter Sarsgaard play eco-terrorists who blow up a retaining dam that, as they believe, has a bad influence in the environment. As a result one of the tourists, spending his time in the woods, is killed and the three main characters undergo a crisis of conscience.

Although the plot is constructed in a way to try to conceal the plan of the protagonists, the story that is being told is nevertheless a bit predictable. There is actually little left to our imagination because nothing really happens in that film. Brief dialogues provide the viewer with little information. Pictures and landscapes create a melancholic ponderous atmosphere. I must admit that for sure, it might have been a deliberate act to limit dialogues to a minimum and compensate it by beautiful landscapes and thus make the viewers think for themselves.

What does the director specifically want us to think about? What is the message? Of course about the damage we cause to environment but also about people who become terrorists to protect the Earth. How do we judge them, what are their concerns and dreams? Literally, little is said. This might be considered either as an advantage or a disadvantage. An asset to Night Moves is that you really need to think on your own to follow the plot.

Maybe the music scenes were a bit too long? The idea of the melancholic shots presenting the Lake of the Woods (Oregon, US) could have ben a good move if the music chosen was not so unfitting. The pompous soundtrack reminds critiques of Hitchcock’s films, but in my opinion, does not suit the pictures presented in Night Moves.

However, I cannot say that it is not worthy to watch the film. The fact that Night Moves is so annoying to me makes the film, in a way, an interesting one. The protagonist is so cloying that you want to help him to talk to people around him, which might also be an asset for the film. It is not another cliché Hollywood film with handsome and charming heroes, but an unsung hero. It is actually difficult to like or to identify with any of the characters. What is more, the topic that is discussed is a fresh and crucial one.

I recommend watching the film not because I did not like it and you want to be polemic about that, but watch it to make up your own opinions, as I have been changing mine numerous times during the film’s showing.