Saturday night Unikum had the pleasure to attend an event organized in Bluebox, where three bands and one Dj performed for the students on Grimstad’s campus.

In a really cool atmosphere, we experienced a nice place for shows with fantastic visual effects displayed in the background plus a game of lights and sounds that complemented the artists.

The show first started with Baertur, a local band. The interesting part was the mix between a classic configuration (with a guitarist, a bass player and a drummer), and a more experimental one (different singers regarding the songs, a keyboard player and a saxophonist). Thanks to this variety, they offered us some pretty good tracks filled with  tension, plus a pleasant show.

A few things could have been better though (as the vocalist had some serious intonation problems). As a whole, we recommend you to check out this promising band !

The Megaphonic Thrift proposed a “psychedelic rock” that is as delightful to hear as to watch, mostly thanks to their passionate members. Their songs could be described as simple, violent and well-constructed, which granted us with an excellent rock atmosphere. Something we especially liked in this band is their capability to connect melodic vocals with a turbulent background. Another strong point is the fact that every member of the band is equally important. Well done guys, hope to see you more often!

Mini-Interview with The Megaphonic Thrift

Have you performed here in Bluebox before ?
– Nope, but this venue is great! It’s nice to see something managed by students! Everyone from Grimstad and around should come here.

How long have you been playing together ?
– For 7 years, we’ve always been the 4 of us. We first met in Bergen at a bar during a jam.

What are your main influences ?
– Mostly experimental and psychedelic music. We actually have an album that we’re releasing in 2 weeks that’s more influenced by the 60’s psychedelic music, like Syd Barrett’s songs for instance.

Where will you tour ?
– We’re touring with Datarock and Drippin for several weeks because we belong to the same label (YAP), but we mostly perform in big towns in Norway in general. We’ve also played in Europe, especially in Germany, Belgium and France. 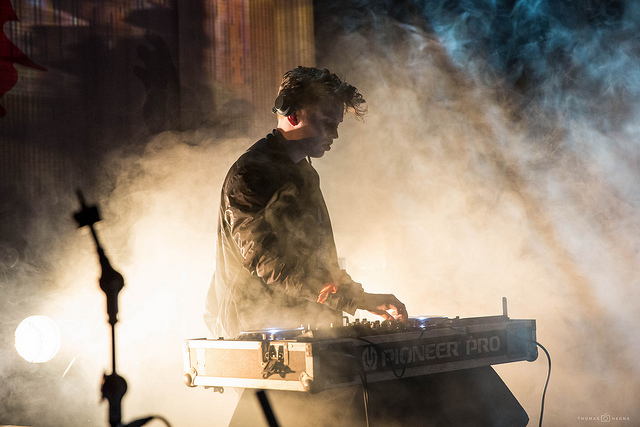 Under the name Drippin is hidden a young and pretty talented DJ. During this performance, Drippin  indulged into an incredibly hard challenge – he tried to «win» the audience mainly through using rythm and dj effects. Unfortunately, even with his ideas, his set didn’t fit really well with the rest of the show. Probably due to a lack of melody and harmony, a low variety of dynamic changes and an easiness in the rhythmical structures. Drippin clearly was irevelant in this “rock” atmosphere and even without this, his music did not have enough originality for a DJ.

The headline of the night had the place they desserved. After waiting for them for several hours, we weren’t disappointed: with a variety of songs always in their cool and distinctive “electro-pop-rock” gender, they pleased the Bluebox with a well-functioning show proving that besides being professionals, they simply enjoy playing their dynamic songs as the many and often funny interaction they had with the crowd proved it. The only weak point  was that the gig was too short: fun, cool, and simply entertaining.