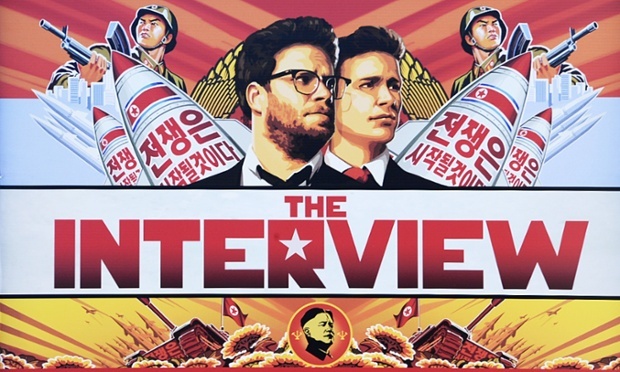 Directed in 2014 by Seth Rogen & Evan Goldberg, «The Interview» is a film featuring Dave Skylark (James Franco) the star presenter of «Skylark Tonight», an American talk show, who is always accompanied by his producer and best friend, Aaron Rappaport (Seth Rogen).

One day they discover that the North Korean dictator Kim Jong-Un is a big fan of their TV show and that they have the opportunity to interview him. Hearing this, the CIA instructed them to do a mission: kill the North Korean leader.

The interview is a very good movie.The subject here is taken very lightly, allowing the satire and the humor in general to be accessible to the greatest number.The problem is that in trying to please everyone, the film sometimes trips over the carpet and even loses some personality. Stereotypes are pushed to their peak, especially in the case of Franco’s character, which is a little annoying at the beginning of the film. The music is extremely mainstream, and the image is similar to a video clip. However it does not prevent some good scenes and the «buddy» humor oscillates between clever jokes and frankly dirty, poor and silly ones.

The moral pronated by the film may look a bit childish, but it is still clever and far from being ineffective. Indeed, the film simply shows that death and war are not conceivable alternatives to solve problems. Beyond that, many very sharp criticisms are made towards the American culture, especially with the «star system» and the media, but more generally to the American lack of knowledge in general. The North Korean culture also gets a few hits in the movie through the image of their leader, completely discredited in the film (which makes me think that from this perspective, the movie is a successful satire).

I doubt the film should be taken for a purely satirical film, even if it looked like it was one. If you expect to see a new «the Great Dictator» in the Chaplin style, you will be disappointed without a doubt. Contrariwise, if the film is taken for what it is (i.e a comedy that certainly was extremely controversial but is just a huge frenzy between Rogen & Franco), then the film perfectly fulfilled its duties.

If you’re a fan of pizzas (even cold ones), or beers (even warm ones) and of evenings laughing like retards with your friends, this is the perfect movie for you.