A story about what lies on the way to the happiest place on earth: Disneyland.

On the road leading up to Disneyland in Florida we find the purple monstrosity that is the Magic Castle motel. This is where those that have nowhere else to go come to stay.

The movie, for the most part, takes place here or in the surrounding area. This is where we find Moonee  (Brooklynn Kimberly Prince) and her gang of friends Scooty ( Christopher Rivera) and Dicky (Aiden Malik). We get to see what type of mischief they get up to at the expense of the manager Bobby (Willem Dafoe).

Without saying too much about the plot, it takes place over the span of a summer, where we get to see what kids do when there aren’t any parent around to stop them. But also we get to witness a gradual bonding of Moonee and here troubled mother Halley (Bria Vinaite)

A big part of what puts this apart from generic movies about the lower part of society, is that we see all of it from the perspective of a child, Moonee. This means that instead of a life of the struggle to go from rent payment to rent payment, we see the type of fun children have. The glimpse into the awful part is also present, but its not the main focus. The use of color made it visually enjoyable to watch. If you’re a fan of the director Wes Anderson’s use of color, then you´ll enjoy this.

The cast did an overall great job in portraying their characters. Not having many widely known actors, with the exception of Willem Dafoe, actually made me feel like I was watching something real instead of acting, and that is pretty rare.

What stands out is Brooklynn Prince portrayal of Moonee just a phenomenal job considering this is her first major movie as the leading role. Willem Dafoe as the manager Bobby, a simple but yet complex character, was also great.

Even though there was a flat part in the middle that made me lose focus, it more than made up for that with a heart-wrenching ending. I’ts both sad and happy at the same time. I am normally not the type of person to get emotional at movies but this made the tears flow. 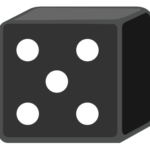 It can be a polarizing movie for many so you’ll either love it or hate it. But either way, I think this the Florida project is something that everyone should watch and experience. It’s a  movie that makes you ask “now what do I do?” when the closing credits roll down. And that is why I’m giving it a solid dice roll of five out of six.