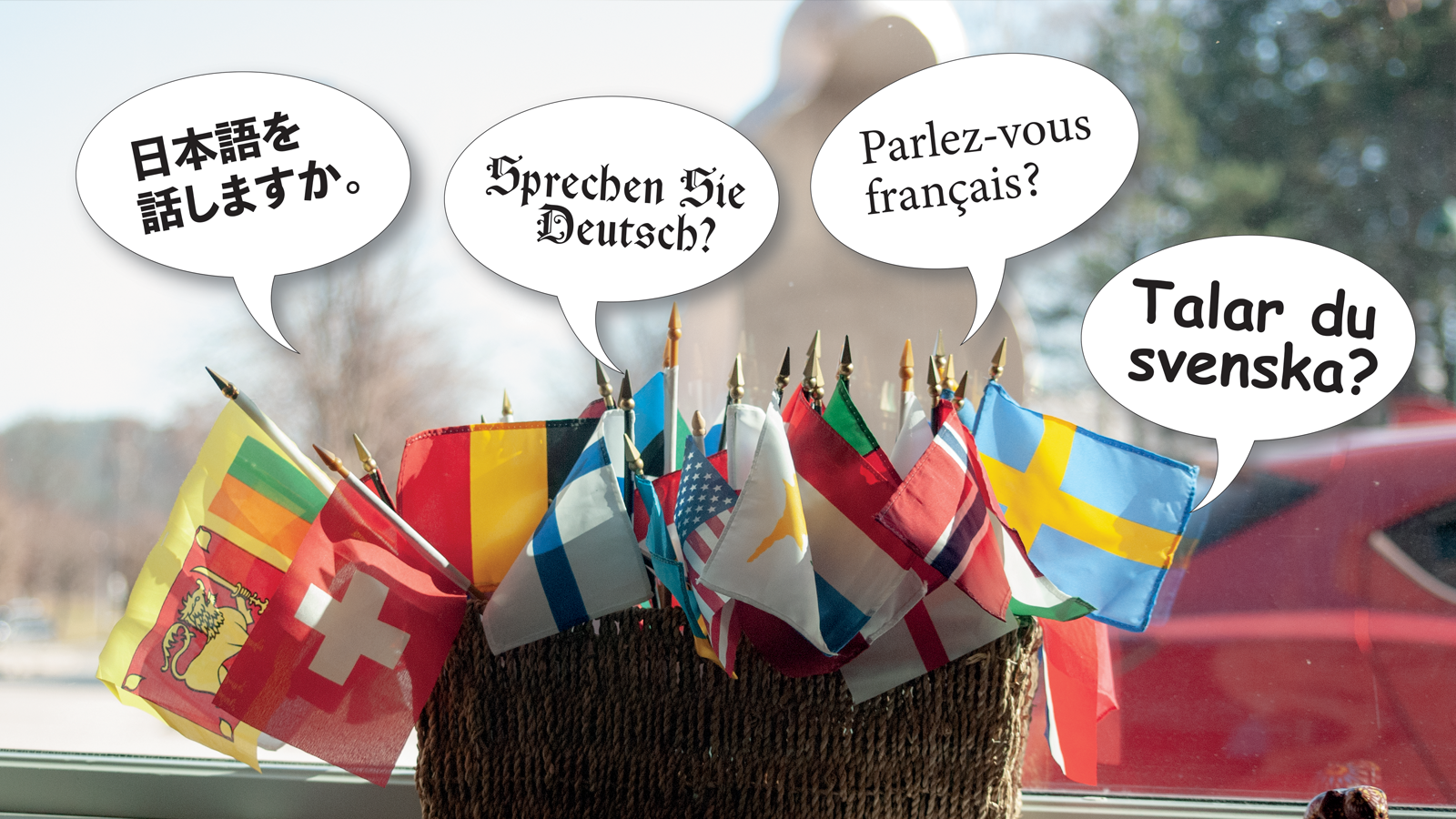 If you have courses that are taught in English, it’s quite likely that you will meet exchange students. The majority of them come from European countries, whereof most of them are from Germany, followed by France and Italy. There are also students from countries as exotic as Ghana or Japan. The level of English has shown to be as varied as the countries of origin.

A POSSIBILITY TO LEARN

For many students, the exchange is a possibility to improve their English. For some, it is the first time that they have lectures in English and have contact with academic English.

– In Italy, we do have all lectures in Italian. When I came here, it was the first time that I had to write academic English, says a student who prefers to stay anonymous.

But it’s not only about academic English. Most students develop English for daily use and conversation. In that way, the exchange also gives these students a benefit when they enter the labour market.

– Last semester, I had a roommate from Italy, and he was barely talking English. That made it very difficult to get in touch with him. He was not really able to say anything, and he had big problems with the grammar and everything. But I also saw how he got better and better during his stay here. That was really great, says Julie Maillard.

Norwegian students and the lecturers can also benefit from the foreign students.

– I have some French classes together with Julie and other Norwegian students. So, sometimes we just help the teacher and the Norwegian students as well. I didn’t experience any communication problems here, says Sarah Pellé from France.

FOR EUROPEANS IT’S EASY TO GET ACCEPTED

– Because our school is a part of the Erasmus program, we could take a voluntary test. This test just helps you to see which level you are at and then you can get some kind of scholarship. So, we made this test when we were about to come to Norway, and we will do it once more when we come back. That is just to see or track your development, but it is not possible to fail, explains Lotte Westhoff and Romy van Hiel, which both come from the Netherlands.

Exchange students from France and Germany also acknowledge that there wasn’t any special test that had to been passed to be able to partake in the exchange program. Neither did Charlotte Bond from Australia.

– We have to apply to our university, and they take like 3 people and send us over when we get a positive reply. But there was of course no English test for me.

Tomomi Kanegae from Japan explains that the process was a little bit different for her.

– I had to submit an application to my home university and write about why I wanted to go to Norway and what I wanted to study. After that, I did an interview and yes, I needed a TOEFL score.

The international office, which oversees the exchange students, says that the basis for the exchange is trust and also that no obligatory English test must be provided.

– In order to guarantee the academic success of the exchange students in our institution, it is required that all of them have a minimum of a B2-level of English. This level is self-assessed, it is not mandatory to provide any documentation or submit an English test score. As you know, the Norwegian system is based on trust and we trust that our international students are able to use English in our academic context and in their everyday life, writes Lilia Mena, who is an intern at the international education office.

Many exchange students point out that there are other reasons too for communicational problems. The different cultures in their home countries influence the communication habits. Some say that Asian students tend to be quieter and shyer and, because of this, are probably not able to play a major part in group projects, while others are not so withdrawn.

Another problem can be the different dialects of the English native speakers.

– Usually the Germans like to correct my English, because they are really good, but there were no major misunderstandings. Everyone is quite good, and they tell you to slow down, or even to speed up. If there are problems, they are mostly with the ones who have English as a mother tongue. Some of the dialects, such as Scottish, are really difficult to understand, says Charlotte Bond from Australia.

Sometimes students just have problems with their English in general.

– There was this one student who nearly wasn’t able to speak English at all, and another from Italy who always took someone with him to translate. But these are singular cases, the majority speaks good or very good English, says Christina who has worked for the Global Lounge during autumn 2018.

Lecturers often support mixing exchange students and Norwegian students. So does Mikaela Vasstrøm, Associate Professor at the Department of Global Development and Planning. She teaches courses such as «The Political Ecology of Global Environmental Problems», where she deliberately sets up groups in a way that they cover a broad spectre of different experiences.

– To mix students with different backgrounds, not just national but also academical, is a great possibility to support social learning. It is something you will need in working life.

Also, exchange students experienced that they did not always get to choose groups to work with on group assignments.

– In some classes we were forced to mix, but in other classes it was quite natural, and they asked us to join their group. Of course, sometimes the Norwegian students want to stick together, but so do the international students. The lecturers often intervene to mix the groups, says Romy van Hiel.