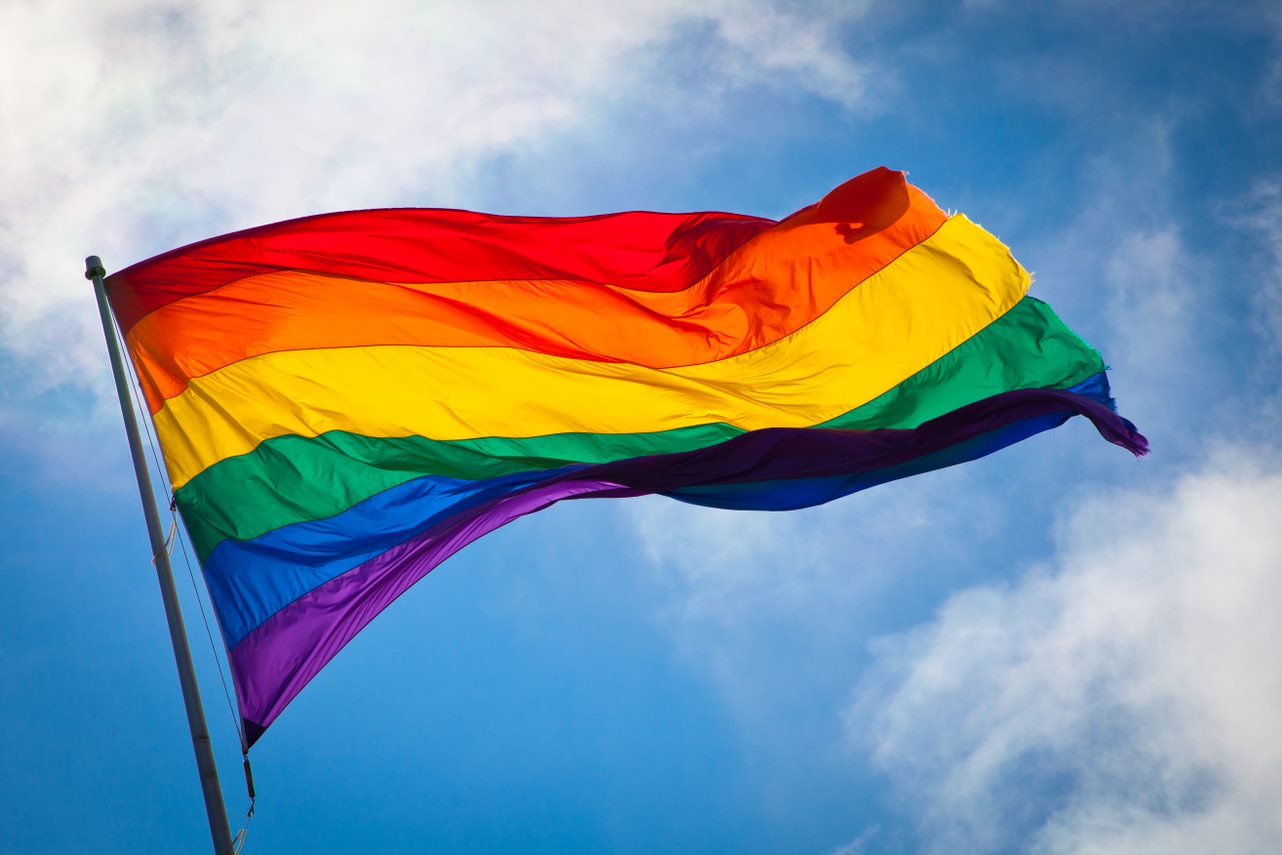 Basic idea: The rainbow has infinite colours, just as humans have infinite number of genders and sexualities.

How many genders are there? Up until very recently, this question would have seemed ridiculous to most people – and still does in some circles. While most people are (hopefully) coming around to the inadequacy of the gender binary, how many genders should we operate with? 3? 33? 58? 71? Some of these numbers might seem ridiculous, especially to someone just coming around to expanding their concept of gender and its vocabulary. I mean, you’ve already gone through what could easily feel like a massive paradigm shift, and now you’re suddenly expected to know by heart several dozens of new and seemingly ever shifting pronouns? ‘Ain’t nobody got time for that!

However, there is a very good reason for why we end up with so many genders, and why any attempted list seems to be ever expanding. How many genders are there actually? I intend to give you an answer. But first, THE RAINBOW!

The Colours of the Rainbow

(please just bear with me)

How many colours are there in the rainbow? Well, here’s a handy rule of thumb I learned in Norwegian kindergarten:

Seven in total, right? Well, let’s say six, because what the fuck is indigo, anyway.

Well, this is not strictly true. We say that there are sev-uh-six colours because of Suh Isaac Newton’s obsession with the number. He had apparently read too much Pythagoras and felt that se-ix was an important number.

But the truth is that this division is a social construct that depends upon the culture in question and its spoken language. Russians and Japanese apparently have distinct words for greenish blue and purplish blue (sinii vs. goluboi and mizuiro vs. ao), which are not considered basic colours in English. Other cultures might even have fewer named colours, such as Vietnamese and Korean, which considers green and blue to be more or less the same basic colour (xanh and purʉda).

How we divide the colours of the rainbow can even vary over time. According to Wikipedia, what Newton in his time would have called “blue” would today be regarded as cyan, and what he regarded as “indigo” would today be considered blue. And apparently, when he started his work with colours, he initially divided the spectrum into five: red, yellow, green, blue and purple. He only revised it later because, well, Pythagoras believed there was a connection between colour and music.

The result of this is that the number of colours in the rainbow is usually between 2 and 6 (ok, 7, if we deign to consider indigo), and this depends on the culture and the language in question.

“But,” You might say, “we are RaTiOnAl AnD lOgIcAl CrItIcAl thinkers, shouldn’t there be, like, a scientifically correct answer, or something?”

Well that depends, my dear friend, You, on what we even mean by “scientifically correct”. I mean, there are other ways of dividing the colours of the rainbow, but they are no less problematic.

Let’s say we try to remove the language component and divide the rainbow into the number of colours that the human eye can distinguish. Reading up on some SCIENCE, given that humans have three separate types of cone cells in our eyes and how they work together, a typical human should be able to discern a total of 1 million different colours – which strikes me as a somewhat unmanageable number.

And notice that I said “typical”. Some humans are born with only two types of cone cells, lowering the number to ten thousand separate colours. In rare cases, some people even have a fourth type of cone cell, making them able to distinguish up to a hundred million separate colours!!! So going by how many different colours our eyes are able to distinguish as the “correct” number, that “correct” number is either ten thousand, one million or a hundred million – and that is without going into differences that might exist between specific individuals’ talent for distinguishing these colours!

Well, ok, if we attempt to remove humans from the equations (which is obviously stupid, as we’re talking about the visible colour spectrum here) and go by unique frequencies, we end up with “more colours in a rainbow than there are stars in the universe and atoms in our bodies”.

What I am trying to say here, is that there is no correct number of colours in the rainbow. It depends entirely upon how we chose to look upon it. It depends upon our language and culture; it depends upon our historical circumstances; it depends upon the literal eyes of the person looking; and even the “scientific” answers depend upon the questions we chose to start out with, which might in-and-of-itself be dependent upon cultural, linguistic and even geographical or planetary factors. While the rainbow is very much a natural phenomenon, it is the humans who see it who define it.

I have a confession to make. I’ve been lying to you, because this entire time, we haven’t been talking about the rainbow at all.

Well, ok, we have, but what I am trying to say is that what we learned about the number of colours in the rainbow can apply equally well to the number of genders we have or should operate with.

Wikipedia defines gender as “the range of characteristics pertaining to, and differentiating between, masculinity and femininity.” This may include biological sex, sex-based social structures (= gender roles) or gender identity.

Let’s put aside the can of worms “gender identity” is often treated as and look at “biological sex” and “gender roles” through the lens of the rainbow.

We are used to thinking of gender mostly in terms of a binary. Woman or man. XX and XY. Pussies and dicks. Masculine and Feminine.

But this is wrong. Just as the colours of the rainbow exist on a spectrum, so does whatever we tend to associate with gender. Men are stronger than women, right? Well, that depends on the person in question. A lot of individual women would be stronger than most men, so our strength isn’t a defining characteristic. Neither are boobs. Many men have boobs, or “moobs” (i.e. man boobs). Men can even learn to lactate. While we tend to associate specific traits with either gender, this quickly breaks down when we try to use this as an analytical tool, especially so when we realize that the traits associated with specific genders vary between cultures.

Because just as different cultures operate with different colours of the rainbow, so is gender coloured differently. Making and designing clothes have typically been associated with women in the west. Or at least it used to be until the gays took over that stereotype. This is however considered a male activity (no homo) in certain parts of Africa. And if you’re even vaguely familiar with feminism, then you might have heard about “the patriarchy”. Well, amongst the Mosuo in China, the women are the leaders of the household, the ones who inherit, the ones who make business decisions etc. And when it comes questioning the gender binary, some cultures have been “woke” for centuries. The hijras of the Indian subcontinent are transgender people, considered as having a gender apart from man and woman. And many Native American cultures operate with concepts of gender-fluidity (“two-spirit”) that would seem very unfamiliar to Western cultures.

And just as our conception of colours has evolved over time, so have our conception of gender and gender roles. Pink is female, right? And blue is male? Wrong! Or at least it would have been wrong up to half a century ago, when pink was still considered a male colour and blue a female one. Up until the 15th century, Europeans didn’t even differentiate between boys and girls. All children were called girls, irrespective of their biology. And if they ever needed to differentiate, male children would be called “knave girls” and female ones would be called “gay girls”. The word “boy” was apparently reserved for servants or “churls”, which I’m not going to tell you what means because I haven’t bothered looking it up.

I’ve thus far attempted to show that what we associate with each gender breaks down under any scrutiny. It varies over time and between cultures, and there is so much variance between individuals that no one would ever fit completely into their assigned category even if they were trying to. I mean, even the manliest man ever, Nick Offerman, admits to crying often and heavily, which is such a girly thing to do.

Ok, I’mma stop you there, You. No one has EVER operated with science when identifying someone’s gender. You don’t dig in a woman’s pants to check if she’s got a vagina before you agree to refer to her as a “she”, and you don’t ask a guy for a DNA test to check his chromosomes before you’re comfortable calling him a man.

AND EVEN IF YOU DID, this is not as simple as the likes of wannabe public intellectuals, like Ben Shapiro and other idiots, want it to be. The “facts over feelings” crowd are just being deliberately obtuse and ignorant about the facts in order to reaffirm their feelings. But let’s play their game. I’m gonna put aside the fact that modern medicine can sometimes make it impossible for us to tell the difference between a trans person and a cis person, and that some chicks do in fact have dicks and like it that way. Let’s use Shapiro’s dogwhistle of a term, “biological gender” – which is using what chromosomes you have in order to define gender. Well, congratulations, Ben Shapiro, you’ve successfully shot yourself in the ass and destroyed the gender binary!

And sometimes the chromosomes are not the what determines your physiology. Someone born XY but with Complete Androgen Insensitivity Syndrome – which means that your body does not react to the presence of androgenic (i.e. male) hormones – develops as what we would generally call a woman, despite their XY chromosomes. And this is just one of many conditions that go in under the term “intersex” – people who are born with sex characteristics that do not fit the typical binary notions of male or female bodies.

This isn’t even particularly rare. 1 in every 1’000 women are meta-females, and intersex people are about 1,7% of the population, which apparently makes it about as common as having red hair (1-2%).

And I could go on and on and on. And on. About the problems with our popular conception of both sex and gender. And on. Just as with the rainbow, the CoRrEcT sCiEnTiFiC answer would depend entirely on what question we started out with, and even if there is one, it’ll be one that is unmanageable and completely useless to us. And on.

How many genders are there? Just as with the colours of the rainbow, the answer depends entirely upon what we even mean by gender, and the answer is going to depend entirely upon the culture, the language, the time in history, the individual etc. If you understand how difficult it is to say how many genders there are in our Rainbow, then you will understand how many colours there are in our humans and why putting down a Q.E.D. is nigh impossible. The rainbow, which has long been used as a metaphor for diversity in the LGBT+ community, can thus serendipitously be reinvented in order to talk about and understand gender diversity.

Gender is diverse and complicated. Personally, I vote we toss the entire concept out the window, but that’s likely not going to be possible any time soon. Until then, let’s be excellent to each other and let cultural and linguistic evolution run its course. And when we’ve settled on whatever and however many terms that’s linguistically practical and non-exclusionary to use, we’ll use ‘em. Until then, would I recommend just referring to everyone with a gender neutral “dude”.