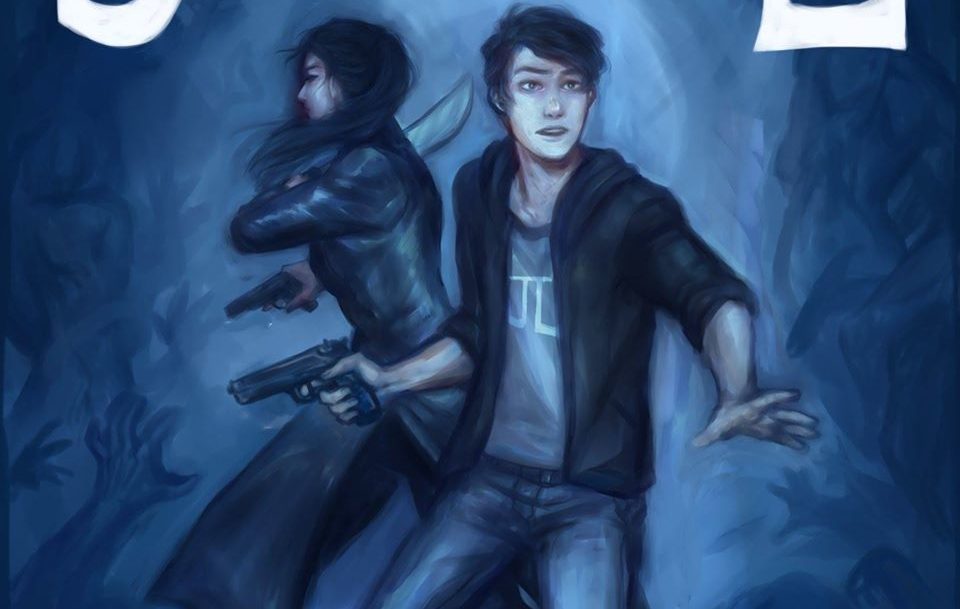 Jake has relied on his sister his entire life. When he got bullied, Cahira was there, when he felt sad, Cahira was there, and when the apocalyptic Tragedy struck, Cahira was there for him. But after a series of unfortunate events, Jake is separated from his sister, and is forced to stand on his own in this new world he has yet to accustom himself to. Excerpt from the first book:

The symptoms often found in hungover people are: nausea, exhaustion, lack of energy and a mindshattering headache (also found in several victims; regret). Jake had never really been hungover before, but at the moment he experienced every single symptom, only it was a hundred times worse. And unlike most hangovers, this one did not seem to have a happy ending. His mind was scrambled, every single exposed bit of skin had been severely damaged and lastly, he was all alone.

He slowly tried raising himself, but to no avail. His body was aching terribly all over. He scouted his surroundings. The room he had fallen into was gigantic and circular-shaped, bearing an uncanny resemblance to a subway station. Both floor and walls were covered in tiny, gray, stone tiles, with the occasional tile missing. Along the walls were lamps lighting up random parts of the room. The lights were fairly dim. Was there a generator somewhere that was still miraculously powering the lights? It had been so long since Jake had seen the wonders of electricity.

Jake eventually managed to slowly lift himself into a sitting position. It was all his defeated body could handle. A thousand bells kept ringing in his head, and he had to forcefully keep the bile in his stomach. He went through the events his brain could remember. Where the heck had the earthquake come from? Was it even an earthquake?

“Sis?” he whispered, his word echoing in the subway.

The noise occupying the normal world had died out along with most of its population, so silence had become second nature to him. But not without his sister. Because she was not there with him. A thousand thoughts blasted through his head; had she died, been stuck beneath rubble or just left him behind? No, he remembered now. Before he fell, he could see her position, and she was far away from where he had fallen. He looked up towards the ceiling and realized how lucky he had been. The biggest pieces of rubble had collided into each other, sealing off the ground above. Jake had presumably fallen through right before the collision. Some electric cables dangled in between the rubble, probably due to them crushing an electric application on their course. However, he did not feel lucky. It took mere moments for pure horror to engulf his mind. He was alone. His sister was not with him. Every breath became a struggle and was escalating quickly. Sweat started gathering on his palms and temples. His head jerked to the right as he was sure he had heard clatter coming from that direction. A tunnel, through which trains had once traveled at high speed, was submerged in darkness.

The light flickered, creating tiny shadows which danced across the room, and Jake felt like lying down and cry. Some part of him knew his mind was playing tricks on him, but that rational part of him was slowly fading away, replaced by a menacing madness. He had to find the gun. If there was an Infected lurking nearby he had to protect himself. With this many open wounds he was a beacon for Infected in the vicinity. Another clatter echoed. His eyes swept through the entire room, but he found no gun. His long strains of black hair became moist as more sweat gathered on his forehead.

But then he saw it.

The gun laid next to a broken trashcan, looking perfectly intact. The adrenaline reemerged and coursed through his veins, causing his pain to vanish. He needed that gun. He groaned as he raised his aching body into a standing position. One step, two steps, thr-.

He stumbled slightly, as the weight of his body toiled his leg.

His heart was stuck in his throat and he could feel every single heartbeat. However, he could not let it distract him from the goal. Another step was carefully taken without any issues. The second one caused a bit more trouble than the first, but it was still manageable. The gun was almost within arm’s reach now, but Jake was still not close enough. Then he heard it. A disturbed breathing echoed.

His legs began shaking to the extent where they gave out. Jake crumbled to the ground like a house of cards and felt just as useless. Luckily, he had tilted towards the gun. He stretched and was precisely able to grab it. However, he realized the gun would not help at all. Because the moment his fingers felt the cold metal, they instantly went wobbly. Every curse word imaginable flew through his mind. The situation did not fix his prior issues with handling guns, it only amplified them. A light started flickering in the tunnel from where the breathing and clattering had emerged. To Jake’s surprise, nothing was there except more tunnel. A relieved sigh escaped his mouth, and his nerves slightly calmed. He supported his back towards the wall.

Just as he thought the danger had passed, he realized his mistake. The design of the subway made an easy travel for all sound, making the clatter and breathing of an Infected sound like they came from a dark tunnel, when in fact, it came from seven steps in front Jake.

The anorexic silhouette of an Infected stood completely slumped towards a pillar supporting the ceiling. Its left leg was completely bent, causing every step to be a struggle and depleting it of energy. Even Infected could get tired and need rest sometimes, at least the ones Jake and Cahira had encountered. But for a beacon such as Jake, even the most depleted Infected would be consumed by a vile bloodlust. It seemed to have been on the move for a long time to make it to its next meal. The bent leg was probably what had kept it from arriving earlier. But it had managed. Slowly, but sternly it walked towards him. It walked towards him. It walked towards him. Jake was frozen solid. His hands had stopped shaking, but in return, everything else had seized functioning. With every step it took, Jake felt his heartbeat become more and more distant. He felt the room swirl around him. His vision became a disorganized mess.

“Am I having a f-fucking blackout?” he thought to himself.

He was baffled. The natural survivor’s instinct was nowhere to be found within him. Did his unconsciousness find no will to live? No matter how hard he tried focusing his vison, it still stayed a blurry mess. Approximately three steps away. Its deranged body staggered, and its rotten teeth clattered in hunger. His reduced vision amplified his sense of hearing. How he wished it did not. The sound of the Infected only served as nightmare fuel. One more step. If its leg decided to give out, it would slam straight into its juicy meal. What little energy Jake had left was depleting and his mind was near unconsciousness. So close to being consumed by the vast darkness.

“Jake, pull yourself together,” a voice echoed in his mind.

Jake was profoundly confused. Suddenly, his strength seemed to be regained.

Time seemed to slow down, seemingly caused by the adrenaline reemerging.

“Jake, I need you to hold the gun steadily.”

And then it raised itself. It was still wobbly and uncertain, but there was improvement.

“Aim for its head Jake, before it’s too late.”

The pistol’s barrel was pointed directly at the limping Infected’s head. One final step, and death would be unavoidable. He needed to pull the trigger.

Jake tried, but something kept holding him back. It was his prior fear. It had lingered, making sure it would cause the havoc it sought.

The fear spread throughout his body, locking his limbs in tangible fear. It was only a few centimeters away from munching him. And if it did not finish its meal it would still turn Jake into one of those sick beings. It entered its final step. Jake could smell the sickening breath emitting from its mouth. Rotten flesh and teeth.

With a roar of his own, Jake firmly pulled the trigger. The sound of a bullet being fired echoed in the subway and lingered for a few seconds. The Infected almost fell dead atop Jake, but he luckily caught the body and threw it towards the side before any of its DNA could come in contact with his blood. It was dead. Dead. Jake did not care for the rotting carcass that laid beside him. He had killed it. He stood victorious. A laughter of victory emerged from him. Even a few tears trickled down his cheeks. What would look like a psychotic breakdown to any bypassers, was a victorious ruse for Jake. He laid there in utter silence for several minutes. His body had largely begun cooperating again. Which then made the obvious question pop into Jake’s head.

The natural conclusion to draw was that this had been his survival instinct kicking in to the fullest. But that was not the correct answer either. There was a voice, which was not his own inner voice. Had he began walking the path towards insanity? The idea was shook away before it could take roots. Maybe, it had been a form of auditory hallucination? That he “heard” other voices?

“Who are you,” Jake thought to himself.

“You can call me Clach.”

And for the first time in Jake’s life, he fainted.

Jake’s Survival is an unique experience, where you as the reader decide which path Jake will walk. At the end of this book, you will be faced with a choice, that will signifcally alter where the story goes and what type of person Jake will turn into. Consider also this; not every path will have all the answers to the mysteries surrounding Jake’s peculiar circumstances. Choose wisely, because sometimes the most obvious choice, might not be the best.

Information on where you can purchase the book can be found at facebook.com/JakesSurvivalBook.