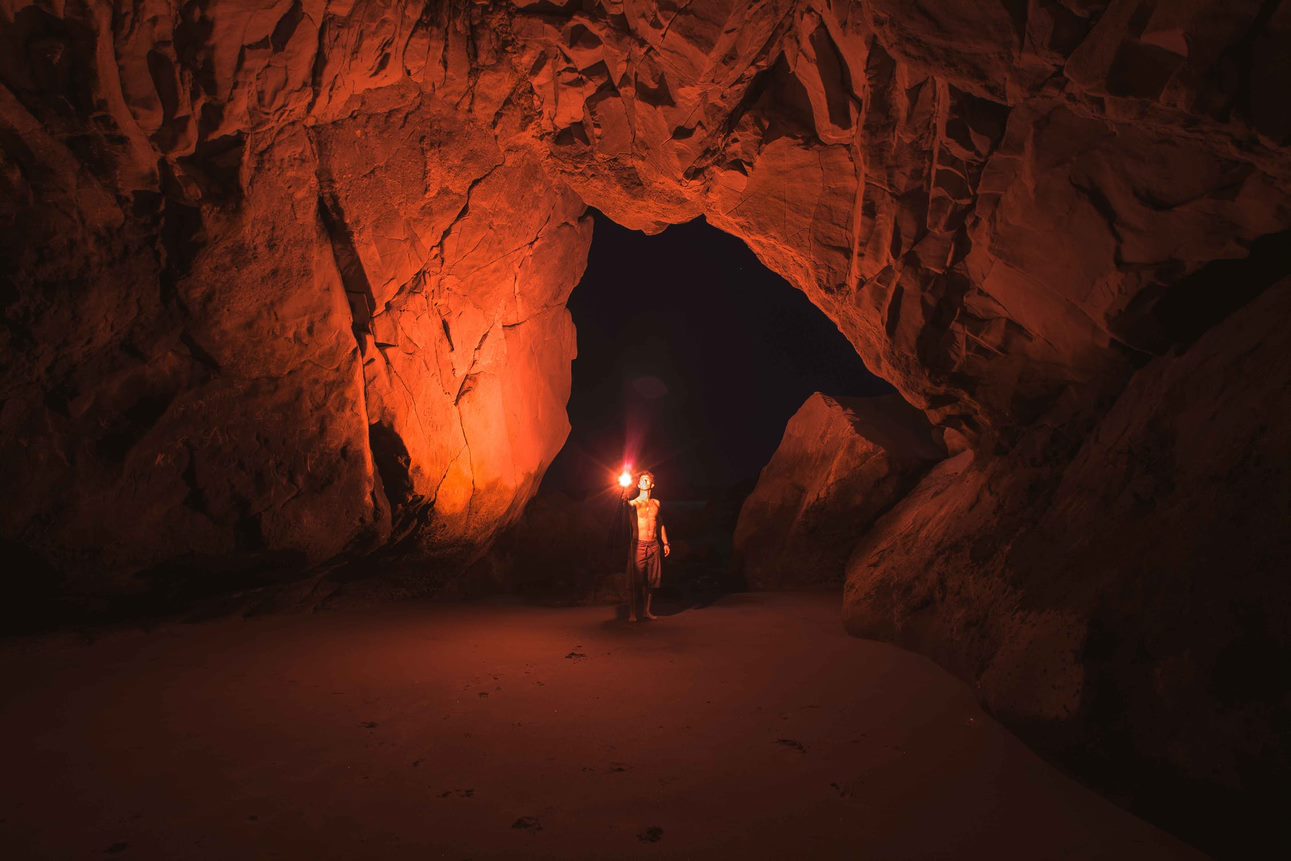 The crashing sound of rock disintegrating into thousand crackling embers sends my quivering heart into constant thumping. It thumps to a beat no one can hear, and for which I do not know how to stop the music.

I take deep breaths, almost choking on the hazardous ashes torpedoing all about, like tiny droplets of rain, ready to kamikaze towards the ground in a storm. But despite their effort to dissuade me, I battle on, ready to wage war if I have to. Although, just making my way to this meeting shouldn’t involve a declaration. Nevertheless, if I do not gather the courage to press on, despite the many emerging and frightening sounds, I will be late. And Mother does not appreciate tardiness.

I eep, I twitch, and I look about me as if a predator is lurking behind every pillar, every shredded piece of rock, even in the depths of the scorning lava. Oh Heavens, if I’m late, how I will be the laughingstock! Why does my bravery falter in the presence of my superiors? No, no Tessy, you’re just as much of an eligible member as them! Despite only being a star in a sky filled with planets and constellations, I shine just as bright! Or, that’s what Heavens would console me with. I hope her eyes find me, sparking with the same excitement I feel coursing through my veins every time I lay my own upon her.

Being utterly captured by my own dimwitted daydreaming, I almost stumble into the marbled desk of security. I look about, as if a deer in the headlights, confused and quite frankly, embarrassed.

I mutter an apology, words which I have repeated one too many times, for which they feel etched into my mind as my only vocabulary. The stone slabs open into the deafening darkness, and I muster what courage is left from the uphill battle of journeying into the core. It was not yet time to yield, albeit, the prospect was tempting. The darkness swirls and devours whatever my vision tries perceiving. But I would not be swallowed, and in retaliation, I conjure a spark. A golden ray of hope, lighting the cave enough for me to navigate its corridors. I feel the safety and buzz from the single spark, enveloping me in the closest thing I’ve come to genuine warmth. This is the gift Mother gave me, one I shall not take for granted.

Rooted on his old stump was Woodstock, barking his disdain for my lateness. His furrowed brow carved further and further into his frown for every instance I see him, his eyes hollow yet filled with the exasperation of a man who lived through countless ordeals and annoyances. I find myself in a familiar position, apologizing, however, before it can commence, the stout voice of Amphi saves me:

“Settleth down thee fusty sap! As if ‘t be true we’ve did discuss aught of value yet. Tessy! A joy to seeth thee, mine own lief, all is well?”

With a heartfelt smile, lady Amphi waves me welcome, her woven, white hair flowing gracefully to the floor, her radiant face a splash of freshness in comparison to Woodstock’s. Despite her age, youthfulness always seemed to wash over her, her age being drowned in her crystal-clear skin, and sharp, blue eyes. I feel reassured, confirming her question and returning it back to her.

“All is going swimmingly here, mine own lief! Although, I doth has’t some cleaning to doth here and there,” she admitted.

My eyes wander about the room like two birds scouting for a nest which could bring comfort and safety, and once they land on the gorgeous sight of Heavens, they settled down, knowing that they’ve found a reassuring home. Her smile, gifting me a greater spark than I could ever conjure, a spark which ignites my heart with a buzzing passion. This time, my heart does not beat in terror, but rather, in love, as I know very well the ebb and flow of the music for which my heart sporadically dances to.

“What’s up Tessy?” she exclaims, springing from her seat, embracing me in a hug

My face blossoms into a ripe tomato. Oh, how I hope Mother isn’t watching! I lose myself in Heavens’ white irises coasting along the backdrop of blue in her clear eyes. But when her eyes darkened, and her irises split into a thousand white, tiny flickers, ah, how it was breathtaking, as if the ground below me was swept away, and I was drifting around in their endless beauty. Oh, how she blew me away!

“Stop. No time for swooning. Grueling issue. Not much time,” groans Rocky.

Dug deep into the very ground, Rocky rested, not flinching nor cracking a smile at the sight of me or the others. His rock-hard features are like a poker face, never unveiling whatever may be burrowed in the mine of his mind. Extracting information from him was like venturing into a dangerous excavation, one which could prove fruitless.

“She’s not comin’, ya dimwit! Sit down, so we can start ‘tis meeting proper!” Woodstock commands.

I feel an “eep” quell in my throat, and before I can restrain it, it escapes its prison into the glorious freedom of the boardroom.

“Jeez, you old coot, can you calm down? Don’t worry Tessy, his bark is worse than his bite,” Heavens calms me, and I find an empty seat stuffed between her and Rocky.

“Let’s begin. We all know why we here. The virus. The disease. A disaster, yes?” Rocky begins.

Nods of agreements are exchanged.

Silence. I cherish it, as my memory play back the bloodshed that usual occurs after such tranquility is broken. It only needs a spark…

And thus, the treaty of peace was broken, and I steel myself in preparation for the war to come.

“Your area. Your responsibility.”

“We talkin’ ‘bout responsibilities now, Rocky!? Don’t act all high and mighty wid me! Talkin’ ‘bout disasters, wha’ happened back in 2011 then, mate?! With Japan? Got proper mad didn’t ya?”

“He’s just a sore loser, cause someone demolished him in poker,” Heavens chimes in.

“If being this good is illegal, then take me away, stoner!”

“Now, now, children, behaveth shalt we? Mother hast did trust us with the responsibility of her issue here, we can’t wend neglecting and redirecting bla-”

“Oi, list’n to dis one! Ye think yer so ol’ and wise, you washed-up granny? I don’t remember ye helpin’ out much back then either!”

“Oh, a clever sport art we, Woodstock? Who wouldst bethink yond after 4.5 billion years, a brain wouldst groweth in yond stump of yours? Before we redirect censure here, needeth I remindeth thee yond it wast in thy field the topic of the current board meeting did develop?”

“Oi slag, it wasn’t as bad as dis in the beginnin’. I might ‘ave provided the raw material, but it’s she who enabled it!”

“Hey, get that fat, ugly stick outta her face! She’s not to blame here!”

“Ey, one more time old man, and I’ll chop you into tiny bits!”

“An’ for you, yer meddlin’ with the cosmos is what started ‘tis whole mess! The dinosaurs were an easier bunch to deal with, I’ll tell ya dat!”

“I didn’t meddle with the cosmos! They…just lost another poker game and threw a tantrum like stoner over here.”

“…I have a problem, okay!? I’m seeing a therapist about it.”

“Ah, I misseth the olden days with the dinosaurs, such magnificent creatures.  At which hour all life did belong to me, before those gents hath decided to migrate to Woodstock here. Poor bastards.”

“Stick yer head in one of yer pools an’ drown whydontcha?”

“Woodstock for marry sake! Margret is a sweet, dram thing, nay needeth to wend barking up her tree”

“Stick it up yer fanny, I seem to recall Pompeii an’ I’m pretty sure Australia’s not a fan of ‘er either these days!”

“Ey, don’t talk shit about Margret when she’s not here, she would light a fire under your ass!”

“Oh, sick burn, Heavens, did they learn ya dat in kindergarten?”

“Woodstock! Enough. You talk smack. You get back. 1300s Europe say hello.”

“Oh, yond is quite right, Rocky. The Black Plague. Comical, Woodstock, didn’t yond too originate from thy division? You’re quite the expert in concocting diseases, aren’t thee?”

“You keep yer dirty mouth shut, or else!”

“Oh my gosh, that’s such a low blow, even for you! Let me quote you then, shithead, she only gave them the raw material, but you enabled them!”

“I-I-I didn’t know they would use my spark for t-t-that.”

“And how’s I suppose to know the disease would’ve been used for this!?”

“What we do about it? Something must be done! This charade go on too long. Can’t continue.”

“Just get rid of it then! Just like with the Black Plague, an’ stop blamin’ me!”

Without anyone noticing, a white flag had been raised, and peace was unfathomably restored. Silence once again beckons. Despite my lack of contribution to the discussion and accusations, I feel out of breath just by the pure tension of the room.

“Let’s has’t a vote then, shalt we?” Amphi suggests.

I feel my nerves gather its many strings into the shape of a yarn ball, making every muscle ache with the slightest movement. But Heavens grabs my hand, untangling my nervousness.

“It’ll be fine. Just one vote, and we can get outta here,” she smiles.

“It had a bloody good run it did,” Woodstock sulks.

“We vote. Exterminate disease on Mother Earth. All in favor?”

I’m unsure of where my stance is, so many wonderful and horrific creations has come from it, was it truly good or evil? But as I look up from my twitching hands, I realize that my vote doesn’t matter. It passes either way. Rocky shovels his fist into the marbled table, like a judge prior to announcing his verdict.

With the meeting adjourned, everyone rises, and says their goodbyes to each other, as if the battle that had just ravished had been only but a bad dream. If only us spirits could find friendship like this always. Woodstock and Amphi reminisce of old times, Rocky weighs shortly in. Heavens is busy conducting another constellation. Hopefully, the worst has passed, and a new era of prosperity could blossom, or at least, until the board met for a new crisis.