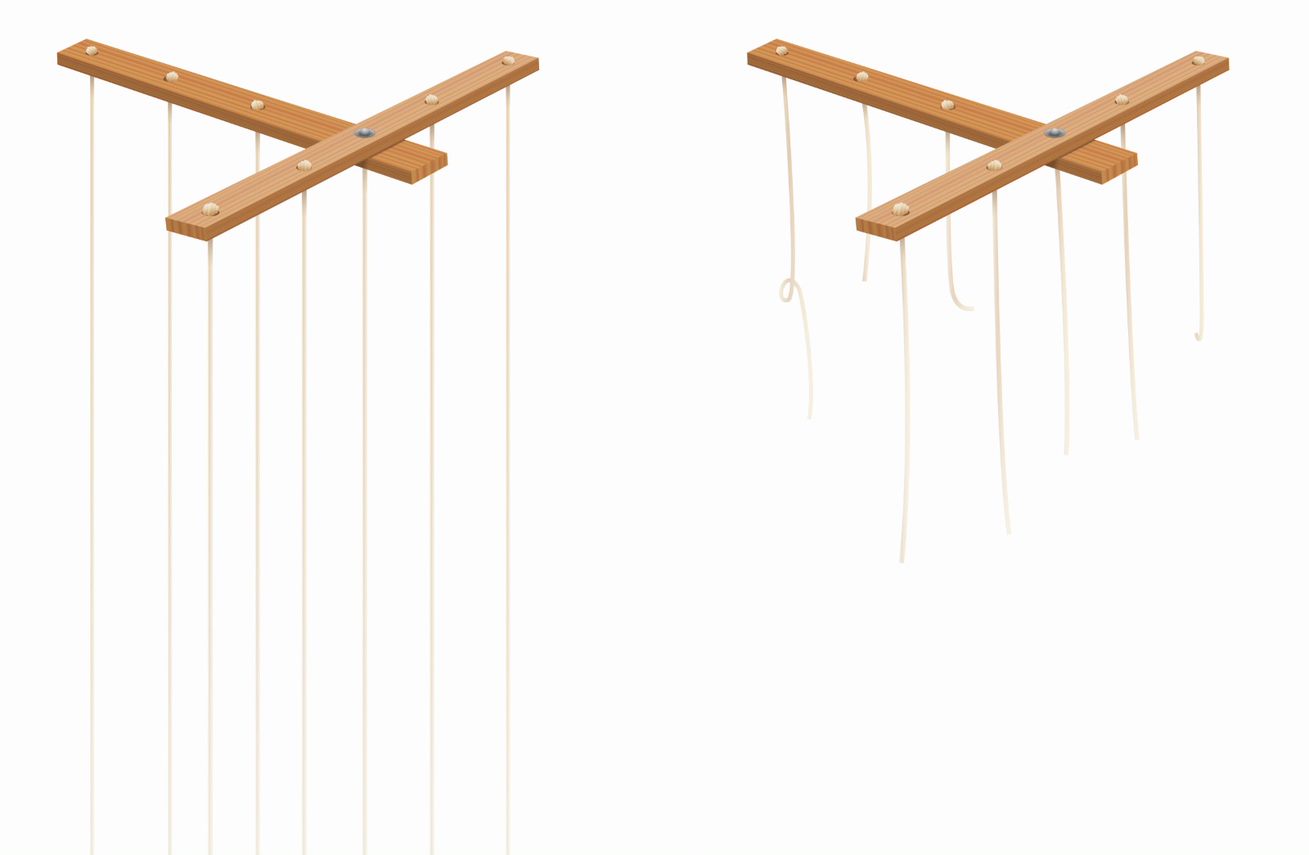 A melody which no one knows entrances the people frivolously moving about.

The bounce, they prance

They flounce and they dance.

Time does not stop the melody nor rigorous patience of its pray, their soul and virtues they dance away. Do they notice or care? It mattered not, they were not aware.

If they all danced

They were too entranced

There wasn’t a single sap

Whom controlled the music.

Sitting upright inside the darkened dressing room, a lean, tall man scoldingly points his finger at the puppet innocently residing in his hand.

“How many times have I told you, on such a grand stage misbehavior will not be tolerated. You wouldn’t want me to stuff you in the in the Forgotten Chest, now would you?”

With the tip of his index finger, Claire involuntarily nodded her consent. The man let out a sigh of relief.

“Good, good Claire. Your role is far too paramount to be neglected or recast. Do not disappoint me again.”

If puppets could shed tears, Claire would, yet her pain was painted away by a thick layer, one not so easily removed. The world didn’t desire to see the sadness of a puppet, but rather the beauty of its labor. This world does not desire ugliness, but beauty. An unobtainable beauty for which we crave, an order in this endless chaos. Yet, the truth that eluded the masses was the illusiveness of control. They would never have it, yet the lies of artistic beauty were a dish they swallowed wholeheartedly, savoring every last bit of the grand illusion. For if they did not feed on its translucence, they would notice the lies, the many strings concealing the truth. Their growling stomachs could spark a rebellion that would not so easily be extinguished, and thus art needn’t only be a dish, but an eternal buffet.

“Ah! Do you hear that, Claire? The audience arrives. We shall put on a magnificent play for them, as we do every day! Gather the rest of the troupe, put them in their positions, it is now or never. Go on Claire, tardiness will not be excused. Places everyone, places!”

What was the story he had planned for today? Who was it again…oh!

He slowly pulled out the ragged cloths cinched together to form the limp body of Henry. Blonde wool strings spring from his scalp, an oversized briefcase sewn into his left hand. The white buttons stitched to form his eyes looked weary as if the many stressful years had taken their toll. Henry’s story was one of misery, yet something absolutely sublime resided in his normalcy. Something the audience craved, something they feared. Yet, what The Puppetmaster relished about Henry was his compliance. With every tug of his string, Henry would perfectly mimic his order, dance to unsung melodies, even go beyond his expectations. And Henry had a lot of strings to pull.

Henry barges into his little dollhouse, throwing his briefcase onto the kitchen table. His wife bounces out of the kitchen, Meredith, her fair, golden locks bobbing with her every step.

“Darling! So early! The kids will be absolutely thrilled! Shall I fetch them?” she ecstatically suggests.

“No, I’m sorry, but I will not make it to dinner. I have a late meeting I need to attend. I’m only back to get a change of clothes. And to see my lovely wife.”

They snuggle closer, ending in a long kiss.

“How troublesome, you always work so hard, we almost never see you anymore.” Meredith sighs.

“I know, but I do it for you…and the kids, right my love?” he bargains.

Henry changes his clothes and leaves for the meeting. He waves goodbye to his wife and children, reassuring himself that they’re worth it.

“The world is an intricate piece of clockwork. For the handles to move, each cog must turn, and whether we like it or not, we all have our place in the clockwork.”

“Hello Henry, so nice to see you again.”

The mysterious figure of Mr. U.N. Owen straddles quietly back and forth, sizing up Henry, determining whether he’s up to the task. Not that it mattered, at least not to Owen. His mask conceals not only his intentions, but his desires.

“What do you want this time? I t-though last time was the final favor,” Henry squeezes out through the nervous clacking of his teeth.

“So did we Henry. My apologies, but it seems our problem has yet to disappear. And if it cannot be buried, it must be obliterated. Do we have an understanding?”

Henry could do naught but nod. Owen hands him the forged documentation. In Henry’s hands, he held the domino piece, and whether he wanted to or not, it would topple whatever order someone else imposed. In a sense, Henry was a hero. In another, he was a fool.

“Once coiled in the spider’s web, a prey may only keep squirming, knowing that it will only entangle itself further until its inevitable doom descends upon it.”

The hum of the air conditioner livens the otherwise dead office space. If Henry is caught by either the security camera or a guard, his mission will have failed, and the repercussions fatal. Yet, to balance on the edge of a blade was a performance he would have to endure.

“You can do this Henry, just as you did last time with Ms. Kingsley,” he encourages himself.

The scene shifts from white cubicles to a grand office lined with velvet carpets and furniture polished to the brim. A lockpick is his weapon of choice in the upcoming battle. Like a sword skewering a general, so did the lockpick the lock. The drawer relinquishes its privacy, the perfect place to plant the ticking time bomb.

“I-I did it,” he whispers to himself.

“The player believes himself to make a gambit, yet blinded by his own ingenious, the pawn fails to recognize his place on the board.”

Home at last. Henry’s head lies heavy on the steering wheel, the weight of it too heavy to lift at the moment, to hold it high in front of his wife. If only he could borrow U.N. Owen’s mask.

“Heavy is the head that wears the crown.”

Unbeknownst to Henry, the trickster is closer than presumed.

“You did splendid Henry. But you only brought the coffin, we need the nails supplied as well. I have one more favor to ask of you before you head back to your dear, oblivious wife, and your sweet, innocent children. Will you do that for me Henry?”

The privilege of declining was never within Henry’s grasp, yet he felt the burden of heroism take its toll.

“I-I will not do it. You can’t keep pushing me around like this! I’m fucking sick of it, you and your little ‘show’!”

“Fuck you! I have a wife and kids! I can’t keep doing your dirty work anymore! Find someone else you can manipulate, I-I’m done!”

“…Do you know what I do with puppets who misbehave?”

“I cut their strings.”

“What an absolute disaster, a travesty! Claire, you will have to perform damage control. Ensure my audience will not acknowledge this embarrassment. No one upstages me in the middle of a show.”

The Puppetmaster sat down upon his lean stool, the puppet of Henry resting in his right hand. Without any strings, the raggedy body laid limply in his hand. The audacity of Henry! He would have to be disposed of, like every puppet with no strings to pull.

He slowly dragged himself to the Forgotten Chest, opening the graveyard in which many puppets laid in an eternal slumber, never to be part of a play, nor life ever again. The Puppetmaster took one last melancholy look at Henry, his buttons finally rid of the tiredness that had plagued them for so many years. They looked…peaceful. And that infuriated The Puppetmaster evermore.

“I will have to find your replacement. Too bad with your wife and kids. But you make your bed and now you’ll have to lay in it.”

He dropped Henry down into the chest and shut it close. Suddenly, he felt invigorated, as if the discarding had been a ritual of cleansing. He already knew his next star. He already knew the next story. He already knew which strings needed to be pulled to retain the illusion, what courses to serve to keep the masses full.

The dance continues, with neither pause nor stop, ensuring the delusion is kept intact.

They ignore, they are blinded

They disregard, they are deceived.

There is no order, there is no rhythm. But if they ever stop dancing, and realize their place in the play, there will never be music, to soothe their mortal souls again.

If they are entertained

They are already chained

To the illusion of control

Which had only one goal

To keep the music going.