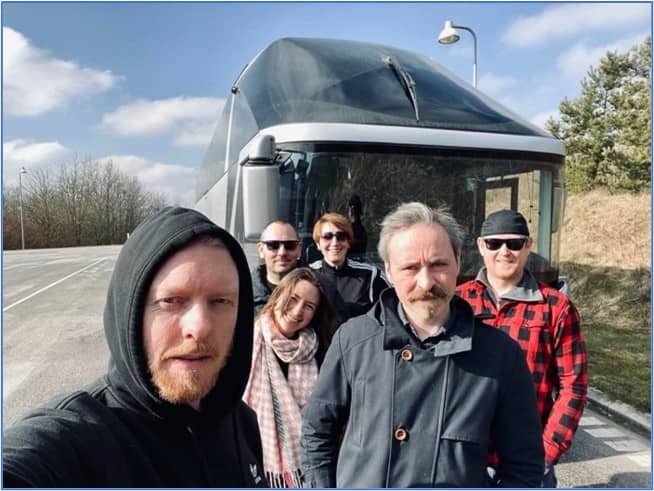 On Tuesday afternoon I received a phone call from my friend in Oslo: “Hey, a friend of mine is searching for a Ukrainian translator to join Norwegian drivers on the trip to Poland, to pick up refugees”. “When is it?”, I asked. “Oh, it’s tomorrow”. And I said… “yes!”. Immediately. Not only because of caring for Ukraine, as it’s my country. But also, because I’m like that as a person: I say “yes” to things way too fast and then as a rule regret it.

This, however, turned out to be a trip I’ll remember for life. With no regrets.

Looking around I see that the buss doesn´t look like an ordinary bus. But, I decide not to comment on that yet. As we’re in the queue waiting for Danskebåten talking about Ukraine and the constantly changing political weather around the world, I decide to ask them “What brings you here? Were you sent from the embassy?”. “No, we’re a rock band from Stavanger. A tour got cancelled so we decided to take our tour bus to Poland and pick up a group of Ukrainian refugees to safety to Norway, you know? Help people, in a way”.

“Ok…. A rock band…refugees…tour bus…and I’m with them on this trip. That sounds pretty normal”, I thought to myself. At that point I was too exhausted to digest any information of that nature. They had no idea I’m a musician too, either. This is how the universe works, on the crossroads of reality.

Long story short, here’s the interview I took the evening before the meeting with Ukrainian refugees.

How and why did you decide to drive with your tour bus to pick up Ukrainian refugees in Poland?

We chose to postpone our upcoming tour, due to failing ticket sales. Concert attendance isn’t back on it’s tracks after the corona re-opening of our society. People are obviously still hesitant, and infections are skyrocketing.

We found ourselves in a situation with free time on our hands, and a vacant bus. Then, our driver, Tom Are, suggested we should drive the bus to Poland to help refugees get to Norway.

After swapping out the beds on board for regular seats, we were all set to go.

Prior to this, we initiated a fundraiser called “musikk-spleis for Ukraina”, currently counting 140000,- NOK. The 28th of April, we’re also arranging a solidarity concert at Folken in Stavanger, called “Glory to the heroes”, with several of the best artists in Rogaland. All of the ticket sales will go directly to Flyktningehjelpen. (refugee help organization)

Did everyone immediately agree from the start? Were any of you hesitant?

Yes. Everyone thought it was a really good initiative. It feels good to channel our energy towards something constructive. I think the vast majority of people watching this situation are thinking about what they can do to help. We are using our means to assist refugees from war, and we hope it will inspire others to support the case.

We have a platform, and we think it’s good to use our position to inspire others.

What do you think about those who choose to be neutral and apolitical right now?

I can understand people who choose to be politically neutral, in general. However, I cannot fathom how anyone can stay neutral to the war crimes that are currently taking place in and against the people of Ukraine.

A lot of students feel powerless and unable to contribute. What can they do?

I’m thinking that there will be a time soon, where a lot of Ukrainians arrive in Norway. It costs nothing to be supportive., and to be open and welcoming.

Students can contact «Ukrainsk organisasjon i Agder» (Ukrainian Organization in Agder), or other relevant organizations. Call them, send an email, or message and ask if there’s anything you can do to contribute.

There’s also the option to make posters, to demonstrate, and to try to pressure the Norwegian government to do more.

That is a great idea! Our volunteer organization, “Ukrainsk organisasjon i Agder“, was founded just a week ago. We’re an active Ukrainian community, and if anyone wants to join us in our volunteer work, pm me on facebook or anywhere. We’ll be very, very happy to have students in our board as well. How does the war in Ukraine affect your everyday life?

It’s like a dark blanket over your everyday life. We watch the news constantly, and it affects us emotionally. I can’t really fathom what’s happening. It’s indescribable.

What affects me is that I can go about with my life as usual, while people elsewhere in Europe are stuck in a bloody war, without access to food, water or electricity. I think it’s appalling, and it feels very close this time. Other wars are further away, and you watch that, and obviously empathize with them. But this is closer, and that triggers another kind of anxiety.

Many students are getting fed up with all the news about the war. What’s your message to them?

Has anyone criticized your trip?

We’ve been asked a few critical questions as of why we’re going, when the prime minister just advised against going on private trips. But that’s from the perspective of the current government. And then there’s the Polish perspective – because Poland is closest and receives millions of refugees which is becoming a huge strain on their country.  And lastly, there’s the human perspective; we think things are moving too slow in Norway. We can’t help everyone. But we do what we can to help some.

What’s your next move, after this project?

That would be the charity concert the 28th of April. We will also be playing at several festivals this summer, and then there’s a tour in Norway – including Kristiansand.

We almost didn’t sleep during the nights on our way to Poland, in addition to so many problems that needed urgent solutions. I feel like personally, I experienced a huge will to help. BUT, at the same time, I felt scared. “How am I going to meet these people? What am I going to tell them? How should I keep myself from being emotional?”, etc. These were people that have literally lost everything, their houses, their businesses, their schools, and most importantly…their families. Now, they were forced to flee from their homes. And that alone leaves an imprint on one’s soul.

The things they shared, the things they said, is a subject for another article. We still have a long way to go before we reach Norway. I’m tired, both physically, and emotionally. I really wish my mom and my friends had been on the bus, instead of back in Ukraine, in danger. But, I’m also glad; those 30 people are safe now, and have a chance to start over. Yes, they are terrified; some of them are elderly people who have never been abroad. They had to leave everything and start over at the age of 80. Imagine that! 80! With no friends, no family in Norway, no language. If I were to flee to Mars, I think I’d find that more comfortable, than these people in this situation. Their lives started with WWII, and now… now they wonder… if it ends with WWIII. Because the world they knew, has ended. Literally.

There were also children there, small children, with adult eyes. They have seen too much. They heard too much. Too long in cold, uncomfortable rooms and shelters. They do, however give me hope for a better future. And I know that when they grow up, they will build a warmer room, away from basements. A room with space for all. In that room, in serene silence, they’ll create music, instead of listening to air-raid sirens.