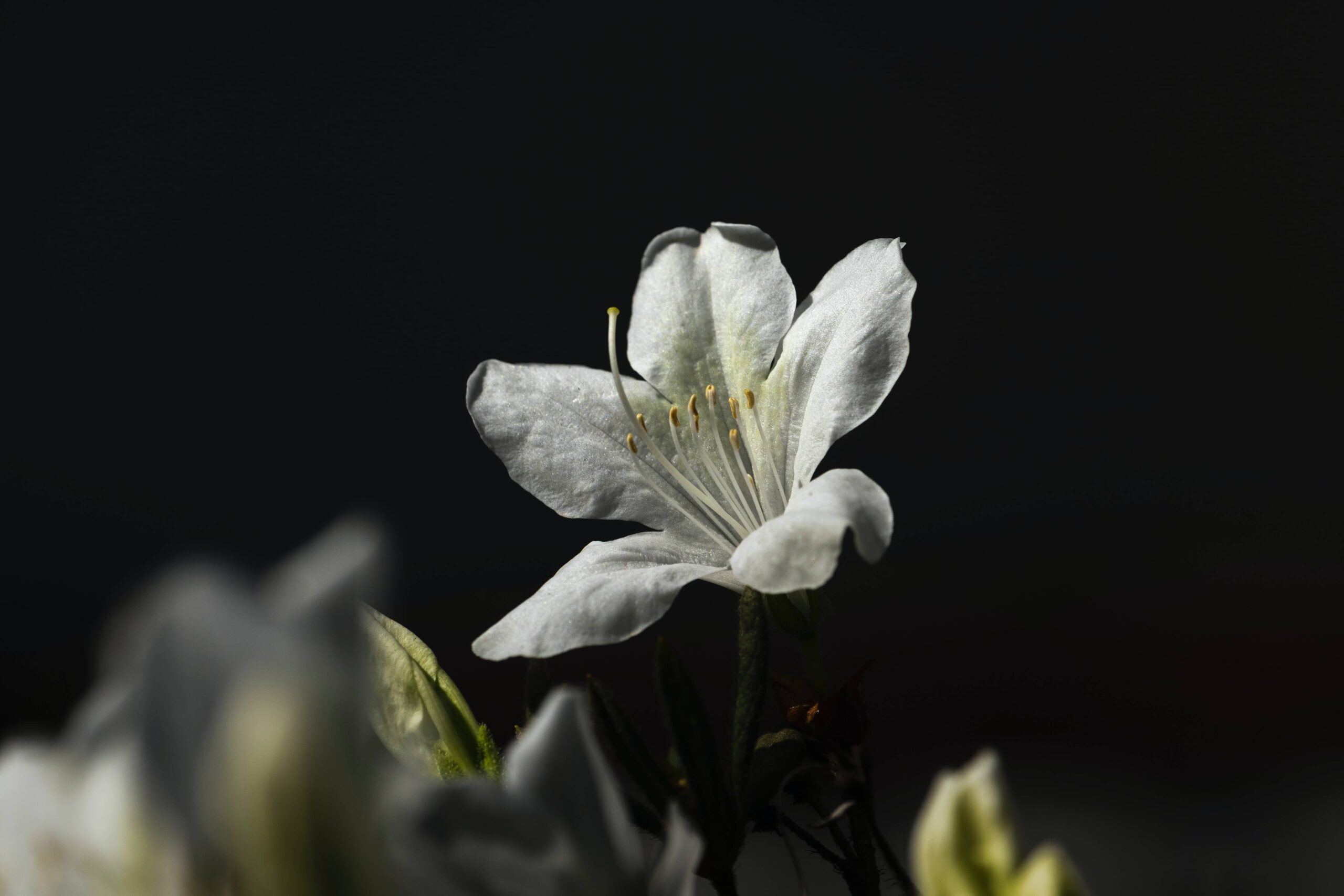 Chapter 3 – Drowned in an Ocean of Indolence

She’s floating again, weightless, a cipher, into a sky which she fervently rejects, but in the endless pool of stars does she find comfort from a reality even more deplorable than the false promises of fantasy. The chain which keeps her bound to the anchor of truth snipped at the prospect proposed by Adam:

“Even if you have to kill them.”

The feeling which had previously burrowed itself in her gut had taken roots, seething into every cell of her body, festering something beyond her comprehension, yet while its sullied purpose stays obscured, the oozing dreariness keeps spreading, like a malicious cancer, a path her family seems destined to follow. Adam had left in the same mysterious manner as the rest of the family, and left Azalea alone in the desolate room, the only sound she vaguely hears is the sound of a ticking clock. Not even her own breath makes a sound.

Did she forget to breathe? How long had she held it for?

She releases a long sigh, hoping the trepidation will suppurate from her core. But it is a short relief, the sting of the festering feeling ensuring waves of discomfort are crashing over her with each passing moment. It must be a joke, surely. She had not been invited with the purpose of exterminating a lineage. No, a poorly executed jest, that’s what Azalea tells herself. However, a dark thought has permeated through her barrier of reason and moral; could she do it? If necessary, is murder possible? The thought is barely audible, a whisper in a storm, Azalea not answering its call as it is lost in the wind, yet it will not stop. After a storm comes a calm, and perhaps then, will the message of the whisper carry.

Azalea’s head rises from the catacombs of her hands in startlement, the comforting figure of Eric dashing in with a diner cart. The family may have vanished but not so their dirty cutlery.

“Are you alright? You seem flustered,” he asks, a genuine kindness oozing from his every syllable.

As Azalea gazes into the unfiltered innocence of Eric’s eyes, she realizes that Adam’s suggestion is a secret best kept to herself, as there is solace in obliviousness. She gathers herself, combing aside long locks of white, locking them neatly behind her ears, while she finds a momentary moment of repose from the stifling trials she has been hurled into.

“My apologies Eric, I just…A painful memory resurfaced, that’s all. This is all a bit much now I realized. But I can’t stop now, right? Not when I have this opportunity presented to me,” she responds.

“I get it. A lot is going on and the family Alighieri are quite the characters. But don’t worry, if you ever need anything, just call for me, and I’ll be there.”

From his vest’s pocket, he pulls out a tiny shell, within its pink walls, a pearl of metal is hidden. It is a gorgeous ornament, glistening in the light. Before Azalea question the proceedings, Eric demonstrates, clapping the shell in two quick taps, producing a resonating bell sound, but not like any ordinary bell, no, it is like hearing the resonance of the ocean contained in the few decibels the shell produced. In her mind, Azalea sees a vast coral reef, her hands feel the gentle touch of sand, and her nostrils fill with the smell of saltwater. In the depths of her mind, something starts moving at the seabed of remembrance, yet its movement is stifled by the strong currents.

“It has a beautiful ring, right? It makes me think of the ocean. I always loved the ocean, some think it’s scary, with its endlessness, but I find something comforting in it. I dunno, maybe I’m just weird,” he chuckles.

“Nonono, we’re not doing this cliché, you’re taking it, otherwise how will I know when you need me? Don’t worry, I’m not gifting it to you, maybe if you clear the trials, but right now you’re just borrowing it. I will find you if you ring it, I will always find that sound. Always find it…”

He trails of, handing Azalea the ornament.

“Now, you should probably get going! Oh, just so you know, whenever you retrieve an object from a family member, Adam wants you to deposit it in a box by his office. He wants to see how you progress apparently. Also, Wary is preparing something, so she would rather not be disturbed, the same with the twins, they’re currently having their nap time. So maybe you should visit someone else first. I think out of all of them, Sarah is going to be the easiest to convince, she never really puts up a fight with anything, hopefully not today either.”

Sarah, the woman from the picture. Her absence, an alarming premonition, yet what her presence enforced, her voice lacked, seeming rather weary of empty courtesies. Perhaps if Azalea simply pleads her case with honesty, Sarah will indulge Azalea with her treasure.

“Yes, it would be lovely to meet her in person. Where can I find her quarters?” Azalea inquires.

“Oh, yes, about that, Sarah actually has moved out of her quarters. You can find her in the gardens, there’s a hedge maze, but in the middle there’s a pool. You’ll find her there, sailing around in her little…boat. She says she finds the night sky soothing. She’s a peculiar woman,” Eric explains while gathering plates.

Azalea follows the trail of moonlight seeping out the oval windows on the far-right wall. The night-sky is clear, an occasional flicker grazing its deliciously blue cosmos, perhaps of a star, perhaps of something else, a word which the human tongue had never learned, but has come to fear. A few meters from the mansion, a trail of stone blazed by lamps leads to a ginormous behemoth made of branches, leaves, and flowers. Is Sarah hiding within the green containment? And how big is it to fit an entire pool inside? However, after witnessing the peculiarities of this mansion, even this town, who is she to question the simplicity of arial management?

“Where can I find the entrance to the gardens?” Azalea asks Eric.

“It’s just out that door into the library and to the right,” he points towards a door.

“Also, you should probably put on a coat, it may be summer, but it’s still chilly out at night. I’ll go and get one for you!”

Before Azalea can object, Eric and his dining cart sprints out the door, reemerging mere seconds later with a light blue coat made of cotton and weaved with golden stitches around the edges. A breathtaking sight, a gift Azalea feels reluctant to accept, once more being at the mercy of Eric’s generosity.

“Now, before you say ‘I can’t’ again, this is merely another loaned item, okay? You’ll have to return it; I think it’s one of Lilith’s. Don’t worry, I’ve cleaned it.”

Eric starts wrapping Azalea in the delectable fabric, draping her in the exquisite aquamarine colored textiles. She feels warm and safe, two feelings which would evaporate the second she leaves the mansion. Eric follows her to the threshold, and she gets a whiff of the secluded nighttime. There’s a faint smell dancing at the very tip of her nose, one she cannot pinpoint, but reminds her of sulfur. How ironic, since what she smells is danger, yet the human nose could never detect the burnt remains of a felled being from the heavens.

“Don’t worry, I’m sure Sarah can be reasoned with. I don’t know her too well, but she never gave the impression of being a difficult person,” Eric comforts, seemingly not ready to let Azalea walk the trail yet.

Something deep within her core yearns for her reluctance, marvels in it even, begging for her surrender. But the battle is naught but lost, the white flag of reason trembling in the winds of determination.

“Well, this won’t get easier no matter how long I stand here. I’ll see you when I get back, Eric,” Azalea says as her feet leave the threshold, her left hand reluctantly letting go of the last safety she had gripped so firmly, the insignia from the knob imprinted on her palm.

“Yeah, I’ll have some cocoa brewed for when you get back!” he smiles.

“Who has cocoa when it’s summer?” Azalea chuckles.

“Oh right, sorry, guess I’ll see if I can brew some tea then,” Eric blushes.

With her bravery mustered, Azalea follows the trail to the hedge maze, hearing the door close slowly behind her. She turns around, one last time, and her hope is gratified, as attempting to poorly hide behind the curtains is the crimson face of Eric. Her sole comfort in this seemingly never-ending night.

How did he know that she loved cocoa?